I think I missed the pictures Grand posted. I will check out what you sent me in the morning. Thanks.

I'm pretty sure that it was 3.3V, but I will double-check when I get home.

Thanks to someone (thanks Jason,) I was able to scope out the data lines and verify that they are actually 3V (or there abouts.)

Next step is to set up something to receive the data and then act on it.
Art G. Granzeier III, President
GranzTronix
http://projects.granzeier.com
Helping to Build a Better Engineer
Top

Yeah, after being provided links to both your teardown and another guy I realized I am almost 4 years too late into figuring this thing out.

In your previous post, you mentioned 18 us which just happens to be pretty darn close to 57.6 Kbps, so I applied a decoder to the data with that rate and sure enough, it looks like the device is sending printable data. You would be able to see this information on a terminal. The format it is sending data in is as follows:

So it seems there are three fields of values separated by a space and terminating in a CR/LF, which is standard for printable data. As far as I can tell taking a look at the data the last field is always 0, but that might change based on a setting or some other input. Since I don't have one of these force trainers I have no idea how they work. I am tempted to try and obtain one to investigate further. This was an interesting find.

Ok, Chris, this matches up with what Zibri shows in his blog (http://www.zibri.org/2009/09/success.html.) These numbers should be the two different EEG values read (Attention and Meditation) plus the Link Quality. The last number will be used to make sure that the system has a reliable data link to the headset (send an alert of some kind if the link goes out [low battery, slipped off Lisa's head, malfunction, etc.]) The first two may be scaled down to create a horizontal (X axis) and vertical (Y axis) pointer to a location on the matrix. By concentrating on the highlighted (lit up) area of the matrix (on a TV/monitor screen, or an LED matrix,) the user should be able to rest the pointer (the highlighted position) on a specific cell long enough to "activate" that word/phrase/letter/number/etc. This would then be passed to the communication section of the program (speech output, on-screen output or some other kind of action from the L.I.S.A system.)
Art G. Granzeier III, President
GranzTronix
http://projects.granzeier.com
Helping to Build a Better Engineer
Top

After the teardown (http://projects.granzeier.com/2014/04/2 ... -teardown/), I mounted the power switch PCB and the speaker onto the base of the unit. Then I made a connector/cable for the serial data:

This is the connector housing (the black plastic thingy) and the crimp-on female pins. 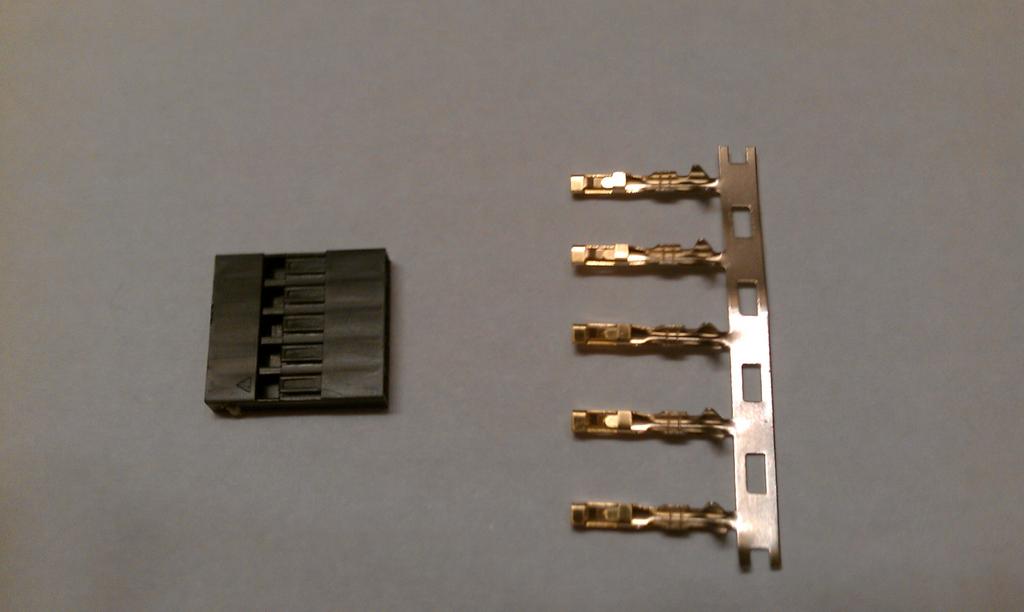 And here is the cable that I made: I just put a connector on one end of the "cable" and left the other end with stripped ends - for a breadboard.

Here, you can see how I plugged the connector into the Force Trainer PCB - The black wire is for the ground, the yellow wire is for 3.3VDC, the blue is for transmitted data (TxD) and the green wire is for received data (RxD.) The only wires that we really need are the ground (black) and the TxD (blue.) From there, I ran the other ends to a solderless breadboard: 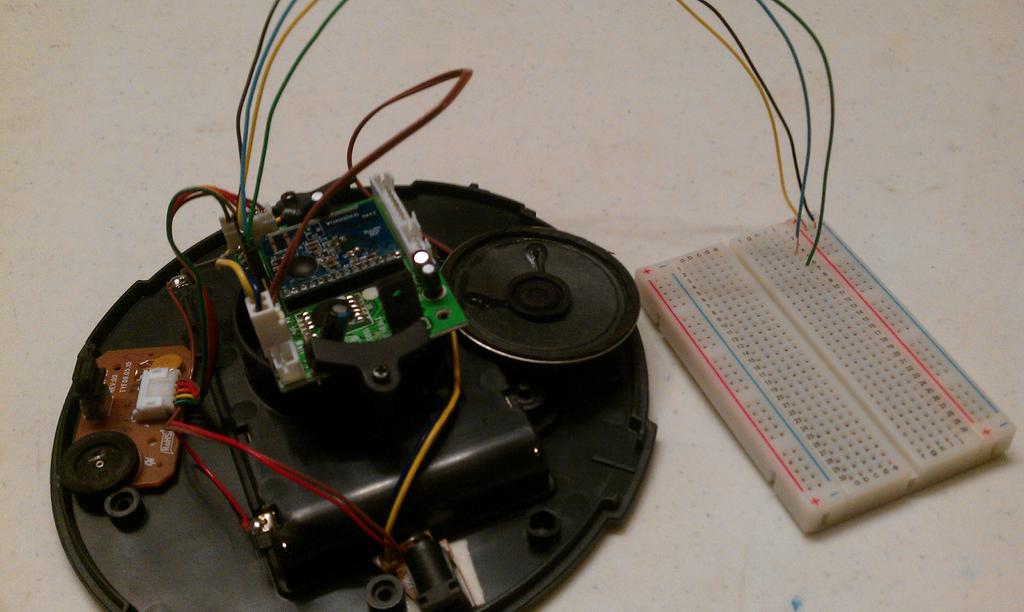 From this, I will continue the lines on to whatever I use to read the data from the Force Trainer. (Or, I will just use the on-board breadboard if I use a dev kit, like the PPDB.)

Ok my cable is all done and hooked up.

I was wonder what the response time of the Force Trainer is. That is if your mental state changes how fast does the Force Trainer respond to that change. Does that show up in the serial data you have seen so far?
Top

Originally posted on the Savage///Circuits Forums on May 14th, 2014, 02:01 PM by ElectronsRfun with edits

Next step is to set up something to receive the data and then act on it.

I do have a basic stamp homework board just laying around if you want to use that instead of the Prop. I prefer to use Spin and the Propeller so I keep getting better at it, besides the I can't learn all the microcontrollers so might as well just learn the most powerful of all of them and learn to use that one well.
Top

I do have a basic stamp homework board just laying around if you want to use that instead of the Prop. I prefer to use Spin and the Propeller so I keep getting better at it, besides the I can't learn all the microcontrollers so might as well just learn the most powerful of all of them and learn to use that one well.

As far as the Stamp goes, I'm thinking that the Prop would be better. It works at 3.3V, and so there is no need for level conversion. Almost all of my Prop systems have USB interfaces, and so, I will not have the troubles with a serial port (stupid newer computers and their giving up the serial and parallel ports.

) All-in-all, I will probably use my PPDB, especially since you have some, and my work can easily be duplicated on your systems that way.
Art G. Granzeier III, President
GranzTronix
http://projects.granzeier.com
Helping to Build a Better Engineer
Top

Originally posted on the Savage///Circuits Forums on June 6th, 2014, 05:44 PM by ElectronsRfun

Well I have been working on a project for a man who's name is Chirs (not Chris Savage). Chris is a Vet. and is about as paralyzed as my Wife Lisa. He does not have ALS but suffered a stroke at a young age in his 40's.

I was put in contact with he and his wife in the event the LISA alarm can help him. I have been able to obtain the parts needed to build his LISA alarm and write a new program for it.

Below is 2 pictures of it. I was able to access Savage Circuits in about 30 seconds with the LISA alarm through a 4th gen. iPad connected via Bluetooth through the AIRTURN device.

Chris will be able to use his iPad to communicate with friends and family, access the internet and play games to help maintain his mental fortitude. In addition to being able to do the above, Chris also has a system that he can call for help if he needs it (this includes while sleeping), a system that talks to him to let him know what the LISA alarm is doing (through an Emic 2 and Veho speaker), and sets off an alarm in the event the system is not in usable condition.

This is what I was hoping the LISA alarm could do, not only my wife but also others.

Chris's current system has many short comings and is rendered useless in the event Chris has a seizure. The LISA alarm is not susceptible to such issue's, but in the event the LISA system was rendered inoperable an alarm is set off to alert the Care giver.

I was also surprised to see the entire new LISA alarm system being able to be powered by a 680mAh 9 volt battery (as back up in the event of power failure) for almost 2 hours. Accessing Internet with iPad.jpg
(140.59 KiB) Not downloaded yet

I'm glad to hear you're progressing in this endeavor. I'm sure it's also a valuable learning experience. I am keeping an eye on how things go with this and trying to find some time to help on specific things that I can, when I can. Keep up the good work and let us know if there's anything we can do.

I'm only responsible for what I say, not what you understand.
Top
Post Reply
71 posts